Read how these SkillBites authors came to write and publish their books.

For years I had contemplated and discussed the idea of writing a book. I had the intention, but no plan and certainly no meaningful actions. I didn’t know what I didn’t know about how to get started and even where to go once I did get started. That was until I met Judy at SkillBites. I attended a seminar that she offered and which started the path to creating a plan, executing that plan and completing the first draft of my book. Without the support, guidance, pushes and challenges to come up with something better, I wouldn’t have been able to create a book at the perfect time and achieve one of my lifetime goals.

My book has opened doors which didn’t exist before. I used to seek opportunities to speak at conferences and now I am finding that event organizers are reaching out to me to come and speak. Most recently I spoke at an annual dinner and we gave away two copies of my book. Word spread quickly and many in attendance wound up buying my book. It was an amazing experience and much of the credit goes to Judy at SkillBites for giving me ideas on how to best promote myself and my book.

I highly recommend Judy and her team for anyone considering publishing a book. I know that when I am ready to do my next book, Judy will be my partner of choice in making things happen.

Valerie Schlitt, founder and CEO of VSA, had always wanted to publish a book. She knew that being a published author would establish her as an expert. However, she never suspected that her book could potentially double her business!

Valerie was invited to bid on a project, and put together her normal marketing collateral – a nice folder of information about the company. One of her staff suggested she also include her book, which she had published with SkillBites a few years before. Not long after submitting her bid, she heard from the prospective client – they were very impressed that she was a published author, and wanted her to send more copies of her book so they could include it in the package of material going to their prospective client. If they got the job, then Valerie’s company would get the subcontract. While the verdict is still out on whether her client has won the award, Valerie advised that if she were to get the job, it would virtually double her business.

What she hadn’t fully appreciated was the huge boost her book gave to her credibility. As Valerie explained, “big companies are risk averse when it comes to deciding whether to hire small companies such as hers or go with bigger companies. By having a published book, I reduced that sense of risk, which has led to more business for my company from larger clients.”

Valerie encouraged other small business owners to get a book written. “If you have any time at all, do it!,” she admonished, “and use it wherever you can.” 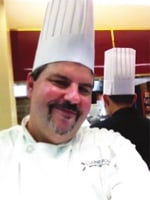 Author of Farm to Table for Schools

Budd is a chef with a passion for helping local farmers thrive and for providing tasty nutritious meals. He combines those passions into his efforts to bring farm-to-table programs to academic institutions.

Having helped several schools successfully implement F2T programs and derive significant benefits from having done so, Budd knew he had a powerful message to deliver, and dreamed of writing a book; but he also knew that he didn’t have the skills to write a book himself. Budd wrote his book and handed it over to SkillBites to clean it up, provide a cover and get the book up on Amazon and in print.

Budd relayed, “My book has accomplished more for me than I had ever dreamed. Everything has snowballed since writing the book. In just the few short months that it’s been out, I’ve gotten 10 or 12 speaking engagements from it, a radio interview, some consulting assignments, as well as opportunities to meet key people I most likely would never have met had I not published a book, like Tom Vilsack, the Secretary of Agriculture and Michael Nutter, Mayor of Philadelphia. A college professor has even contacted me about using my book as a text for his sustainability class.”

Budd added, “SkillBites was incredibly helpful and did a great job. They took the time to understand where I was coming from and what I needed. I know I couldn’t have done it without them. I am so thankful to SkillBites for their help in making my book a reality.”

Sara Canuso, President of Women That Influence, had been thinking about writing a book for over 4 years. Yet the thought of writing a book was overwhelming to her – how would she find the time to write it? How does one even start to write a book? So she kept putting it off. Then she realized how much opportunity she was missing by NOT having a published book. She spoke at a conference with over 8000 women, and was told she could promote her book; but she didn’t have one. She spoke at another conference, where the host offered to purchase 365 copies of her book for the attendees, but again, she didn’t have one. Every time she spoke, she had people asking her if she had a book, because they wanted more information than she was able to share in her presentation; but she didn’t have one.

Recognizing that she needed to publish a book pushed Sara to seek help from SkillBites. She took the SkillBites book writing workshop, which came with the workbook, Writing Made Easy. “That workbook was a huge game changer for me, as it provided the roadmap I needed to write my book,” explained Sara. Shortly after the workshop, Sara took a trip to Italy, and completed the workbook on the flight over. By the time she returned, she had a draft of her book written. Four months later, the book was published.

Within one week of the book’s publication, Sara got 2 speaking opportunities from organizations that contacted her as a result of seeing her book. The revenues from just those two opportunities more than paid for the cost of getting her book published. Since publishing her book, Sara has also gotten a TV interview, a radio interview and more speaking opportunities. She has been sending her book to her major contacts as a calling card. She is planning a workshop for readers of her book who want to take a deeper dive into the material in her book, with ongoing group coaching services as well.

Not only has the book greatly elevated her credibility and visibility, it has given Sara tremendous personal value. Sara explained that she never anticipated the impact on her personally. Completing the book was so liberating, and gave her such a huge feeling of accomplishment, that even if she didn’t get any business from it, she felt the book was worth doing.

Sara offered to talk with anyone who is thinking of using SkillBites services. She can be reached via email at sara@womenthatinfluence.com.

See What Others Have To Say About SkillBites!